Phase images are a useful tool when examining the composition of a matrix in further detail and they often complement other visual techniques. When the nGauge AFM is in ‘tapping mode’ the cantilever is oscillating above the sample surface close to its resonant frequency, ‘tapping’ the surface of the sample. The nGauge AFM collects both topographical and phase images simultaneously.

Whilst in tapping mode, the controller receives feedback signals from the oscillation amplitude of the cantilever whilst scanning the surface of the sample. Unless the surface is completely flat, there will be a change in amplitude as the cantilever encounters roughness. This means that the tip has less space to oscillate so the amplitude will decrease. Following this, the tip would go back to the set point. Essentially, the change in the height of the tip is proportional to the change in height of the sample topography. Within the matrix, if there are substances with different mechanical properties, it can cause a lag in the oscillations between the surface and the tip, which is known as phase shift. 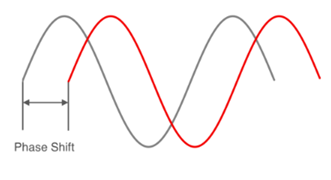 Phase images can highlight areas with different mechanical properties such as viscoelastic, adhesive and frictional. Within an image, these different areas of the sample will show in different colours due to the phase shift. The darker areas show a low phase shift and the lighter areas, a high phase shift.

When there are different materials within a matrix, there can be effects on the tip such as repulsive or attractive forces, this can change the amplitude of the tip causing the differences seen in a phase image.

The DVD example above is a good way of illustrating phase shift. The image on the left is the topographical image and the one on the right is the corresponding phase image. The disc is made of the same material throughout so a detailed phase image is not expected as there are no mechanical differences, However, the pits of the disc are noticeable on the phase image due to the lack of surface contact around the edges of the pits (approx. 113° as opposed to 108° throughout the rest of the image). As the tip travels along the disc it appears that inside and outside of the pit has almost the same phase value due to the tip-surface contact area being very similar.

For more information on phase images or the nGauge AFM, contact us or visit the ICSPI website.

Contact us if you’d like to book a demo, find out more information or organise sample testing with ICSPI’s nGauge AFM.