Thermal analysis covers a wide range of methods and techniques in order to study how the properties of materials change with varying temperatures over time. Thermal conductivity and diffusivity are both properties that can be observed through thermal analysis. Thermal conductivity is a physical property which governs heat diffusion in the steady state, it determines the materials ability to transfer heat across a unit thickness of material. Thermal conductivity can be determined directly through an experimental technique such as the C-Therm Modified Transient Plane Source (MTPS), or can be calculated from a thermal diffusivity value obtained from an analytical thermal method such as Laser Flash Analysis (LFA). Thermal diffusivity is the rate at which thermal energy will spread throughout a material.

Laser Flash Analysis is one of the most popular techniques for measuring thermal diffusivity of solid materials above ambient temperature, due to its simple design/protocol and reliable results. It is a transient heat flux method, where a short uniform pulse of radiant energy is used to heat the front surface of a plane-parallel specimen (Gschwandl et al., 2019). As the sample absorbs the pulse, it experiences an increase in internal temperature, causing a thermal gradient. At the rear side of the specimen, a detector is placed, which measures the temperature rise over time. Considering an adiabatic system with no heat loss, the normalised temperature increase at the rear surface can be calculated. When the sample reaches thermal equilibrium the observations end and the temperature rise over time can be used to calculate thermal diffusivity. The two key parameters used to calculate thermal diffusivity are the sample thickness and the time required for the sample to reach half of its maximum temperature. 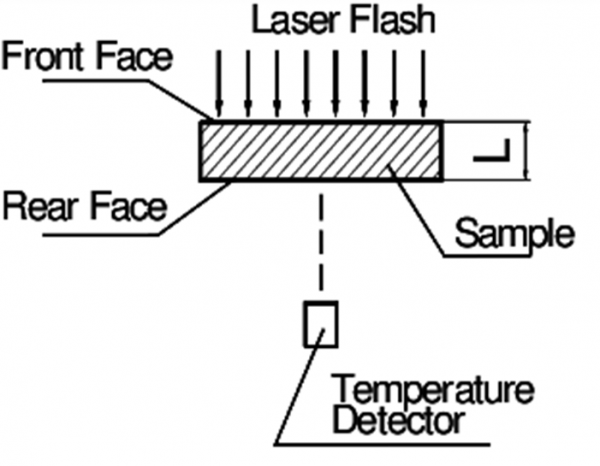 When LFA was first proposed, the utility of a flash tube helped to eliminate issues such as thermal contact resistance. This was typically encountered in alternative thermal diffusivity determinations, this technique also ensured that the measurements were taken in a short enough time, to minimise heat loss or cooling of the sample (Parker et al., 1961). The analytical method of measuring thermal diffusivity with LFA assumes the following conditions (Baba and Ono, 2001):

(i)     In comparison to the characteristic time of heat diffusion, the duration of the laser pulse is negligibly short.

(iii)     After the heating of the sample, it remains adiabatic during the measurement.

(iv)     The sample must be homogenous and isotropic.

Should all of these ideal conditions be satisfied, the pulse can be modelled as being one-dimensional through the specimen. However, it is difficult to satisfy all of these conditions due to effects such as heat loss and the ‘finite pulse-time effect’, meaning that the precision of the observations could be adversely affected (Akoshima and Baba, 2006).

In comparison to LFA, C-Therm’s MTPS is a single sided ‘plug and play’ sensor that can measure thermal conductivity and thermal effusivity directly. The sample is placed on top of the sensor’s spiral heating element and a pulse of heat is applied. The patented guard ring surrounds the sensor coil to ensure a one-dimensional pulse of heat throughout the sample. The MTPS has a broad range of applications from metals, composites and ceramic, to insulation materials, liquids and powders.

Where α is the thermal diffusivity in m2/s, K is the thermal conductivity in W/mK, ρ is the density in kg/m3 and Cp is the specific heat capacity in J/kgK.

LFA is most useful for high temperature applications, such as recording the thermal diffusivity of metals and ceramics. Typically it can record accurate measurements up to ~2500 °C and it offers short testing times of ~40-200 ms, making it a suitable method for highly conductive materials. If measuring non-ideal materials, substantial errors can be introduced, requiring caution be exercised when analysing data. Comparatively, the MTPS is not as suitable for measurements at temperatures >500 °C and has an average measurement time of 0.8-3 s. Although the MTPS is not the ideal technique for high temperature measurements of materials such as metals and ceramics, having such a broad range of applications means that it is the ideal technique for rapid, accurate measurements of thermal conductivity in many materials, with the scope to further calculate thermal diffusivity and specific heat capacity.

For a lab that is calculating thermal conductivity from laser flash, it is often advised to used a dilatometer or TMA alongside the LFA to accommodate and correct for possible thermal expansion of the sample during the heating process. In addition to obtaining accurate thermal expansion (CTE) data, it is also necessary to obtain reliable data for specific heat capacity measurements, often meaning a high quality differential scanning calorimeter (DSC) would be required in conjunction with the laser flash apparatus.

Contact us if you’d like to book a demo, find out more information or organise sample testing with the C-Therm Trident system